As I work standard office hours, I don’t have a lot of time to record sounds without worrying about noise complaints. Weekends are mine to play with, however. Accurate representation of social life with this challenge:

The fact that it’s -10C out and snowing doesn’t hurt, either.

So, I made a thing! For recording my voice without horrible plosives and fricatives that need to be cleaned out by a more experienced audio engineer. (With apologies to Adam and Martin.)

Plosives or stops are consonant sounds that are formed by completely stopping airflow. Stop sounds can be voiceless, like the sounds /p/, /t/, and /k/, or voiced, like /b/, /d/, and /g/. In phonetics, a plosive consonant is made by blocking a part of the mouth so that no air can pass through.

Fricatives are characterised by a “hissing” sound which is produced by the air escaping through a small passage in the mouth.

Affricates begin as plosives and end as fricatives. These are homorganic sounds, that is, the same articulator produces both sound, the plosive and the fricative.

If you’re curious about this, more information here. I’ve never seen it broken down in this way before and it’s also a really interesting way to analyse different accents. For example, implementing or excluding a glottal stop in your speech will bring your accent halfway to a totally different place. For a funnier visual representation, read this.

This wasn’t something I noticed about my accent until I started recording my voice in my apartment and had to listen back. My apartment isn’t too bad for recording and I like that there’s some level of aura in it, but my gods do I have bad plosives.

Usually the way around this is a pop shield. Also known as pop filter, vocal pop filter, pop shield protector. I have a hunch that if you searched for all of these individually they might be priced differently, but I’m not in the market for one I have to pay money for right now.

You can buy a fancy one that clips on to your mic stand, but I currently don’t even own a mic stand. Rather than add to the shopping list and delay myself, I’ll make one and upgrade later.

The instructions are here, and straightforward enough. Bend the hanger into a rough circle. Stretch one leg of the tights over it. Adjust position and gather slack. Try to make it look like it maybe remembered a circle once.

You can also do this with an embroidery frame, if you’re the type of person to prettily stab something a few thousand times. I respect both of those choices. 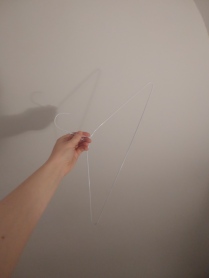 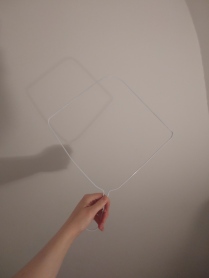 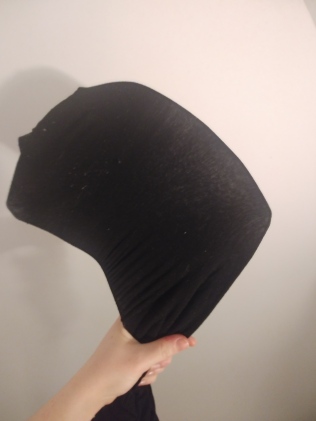 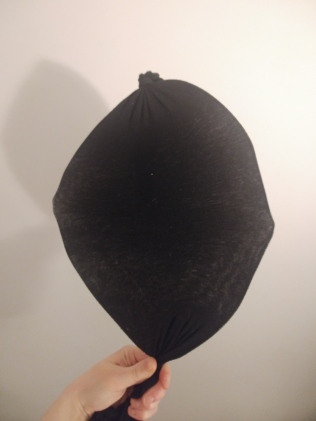 Second-last one ended up that shape because I tried to yank a whole leg over the frame. It doesn’t work out great, as you can see. Better to just tie off the slack at the top and keep tugging around. I recommend ratty old 40 denier tights that you fish out of the back of your tights drawers and the dry cleaning hanger you are least likely to miss.

Fricative is now going to be my faux-swear of choice.